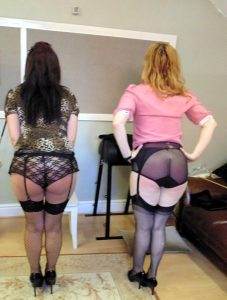 “The school could have been in serious trouble if this man had formalized a complaint or worst, file a lawsuit. What were you two thinking?” said the principal.

“I’m sorry,” was all I could say. I felt terrible and like a complete failure. All I ever wanted was to be a great teacher and inspire children. Now I feel like the worst person in the world. I can’t say the other teacher feels the same way. She’s been in working in the school longer than I have, I’m sure she’s seen this happen before.

It was a day like any other. The last bell of the day rang, telling us it was time to take the students to the front of the school to be picked up by their parents. I was distracted watching over all the kids in my class when a woman approached me asking me to release one of my students to her. I had never seen her before, but having my hands full with my class I let her take the boy. After I came to my senses, I realized she must’ve been the parent I was warned about with a restraining order and I just helped her violate it.

I wasn’t the only teacher. Apparently, the boy had a brother who was in another class. His teacher was also deceived by the woman.

I heard that the issue had been worked out with the parent, but we’re still not off the hook.

“As you two know this is a very serious matter, you two should really be more careful. Anyways, I’m sure you ladies will be happy to know that we’ve been able to ease the situation with the father and has agreed to not push on the complaint. Your jobs are still secure.”

This was really good news, ever since the incident I haven’t had a single peaceful thought.

“Unconventional…” mumbled the other teacher. I felt even more worried when I saw the mortified look on her face. Apparently, even for a teacher with her years of experience this was very unusual.

“Yes, well, after reviewing our options and trying to reach an agreement with the gentlemen, he felt that teachers should put as much effort into their jobs just as they expect their students to perform well. He also added that he expects the school to discipline the teachers responsible,” he paused, “He also requests to participate.”

“Participate?” said the other teacher, “Aren’t we just getting a write up on our file?”

“No, the father of the two boys has requested to spank, or should I say, cane both of you.”

The other teacher moved to the edge of her seat and yelled,“What? That’s absurd!”

“I’m sorry Miss but this is really in the best interest of the school. Now you can accept this decision or submit your resignation. I need your answer by the end of the day. If you accept the terms, the man and his sons will be here first thing in the morning to conduct your spanking.”

We were then sent back to our classrooms. As I entered the classroom I could see the boy I had wrongly released to the woman. I wondered to myself, ‘does he have any idea what his father wants to do to me?’ Looking at him just made me feel worst. I couldn’t react in anger as the other teacher did. I was wrong for not being careful and I should be responsible for these kids. If anything, I think a spanking would ease my conscious and give me that inspiration I had lost after that day.

The next morning, I went straight to the office. I agreed to the terms. I had trouble sleeping just thinking about what was about to take place this morning. I wish I knew if the other teacher had agreed to the terms too, then I would be comforted knowing I won’t be the only one. I entered the office and there sat the principal, the father, and his two sons.

The principal greeted me, “Good morning, please take a seat.”

As I sat I felt the eyes of my students’ father devouring me from head to toe. I don’t doubt he enjoyed the idea of having me completely at his mercy. I didn’t mind. I knew I did wrong, and I am determined to accept whatever he thinks I deserve. Shortly after, the other teacher entered the room and found a seat.

“Now that we’re all here lets get started. Sir, is there something you would like to say to our two teachers here before we begin?”

“There is actually,” he said, “ I never expected two teachers at the same time to overlook this. If you ask me, I think all your teachers should get what these two are about to get for their carelessness.”

“Thank you, I think you’re absolutely right. Ladies, bend over my desk and lift up your skirts.”

“But what about the boys?” I asked.

The father jumped in, “What about them? They were the ones affected don’t you think? If anything they should be the ones spanking you.”

We realized that we were in no position to comment or question their orders. I slowly leaned my face near the desk and lifted my skirt. I then rested my hands on the surface of the desk. The other teacher bent over next to me but she refused to look at me or anyone in the room. We waited with our skirts raised above the waist exposing my white lace bikini panties. The principal had chosen to stand in the corner of the room behind us, no doubt to get a perfect view. I could hear the steps of the father behind our bottoms. With the corner of my eye I could see him raising the cane. I cringed in anticipation.

Then I felt it.

‘Swooosh’ went the cane followed by a sting in my bottom. After taking a swat on me he turned over to my colleague and did the same to her. I could hear her groan and see her fist clenched as she tried to show no sign of weakness. No doubt, she was a strong woman and I wondered if the cane would be enough to break her.

Meanwhile, I tip-toed after every hit and found myself grabbing the edge of the desk as tight as I could. After the fifth swat or so, he slipped his fingers into my panties and pulled them down. I can only assume he did the same to the other teacher. My attention only focused on my aching bottom and humiliation.

I cried and bent my knees as if by doing so it would ease the pain. I caught myself moving my bottom to my side to avoid getting hit in the same spot by the cane. My colleague must have done the same because the man complained,

“These women won’t stay still. Boys, how about you guys take a turn at your teachers while the principal and I pin them down to keep them in place.”

Both the men came to our sides holding us down by the waist. With our panties already on the floor the boys got the cane and “swooshed” across our bare bottoms.

“owww, owww, owww” I yelled. With the cane in their hands it hardly took any effort to make it hurt.

To my surprise, I could hear the other teacher scream, “I’m sorry!” repeatedly. I never did see her as one to apologize, but under the circumstances she had no choice.

“Oh you will be,” replied the father.

The sound of our screams and cries were no doubt being heard by the staff at the office. By the end of the day, we’d be referred to as ‘the teachers who got spanked.’

I lost count of how many times the father and the boys had spanked me. By the time it was over, the other teacher and I were so sore from our bottoms that neither of us stood up to get dressed.

“Ladies, please be courteous and stand up to apologize for your careless actions to this family.”

Despite my humiliation, I had no desire to put on my panties over my sore bottom. We both stood up and faced them. I said, “I’m really sorry. Your son is a great student and I have no excuse for what happened. But I’m really sorry and you won’t have a problem with us again.”

“Thank you very much for bringing this to our attention.”

“Good girl, what about you miss?”

I could tell her pride refused to be broken despite her red face, smudged make-up, and stripped bottom. Still, she knew she had to respond, so she said, “I’m sorry that happened and I’ll do better.”

“Well, I have to get going. Take care of my kids or I will be back,” he warned, “yes sir” I said. The principal, then told my colleague and I, “Get dressed and go back to your classrooms.”

In two weeks we have a teacher and parent conference scheduled. I just hope there’s no more complaints about me… 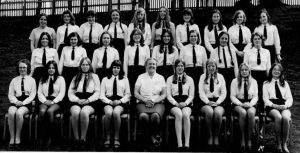 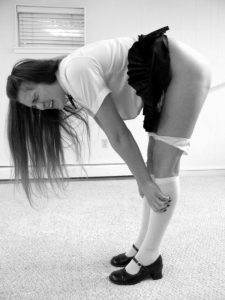 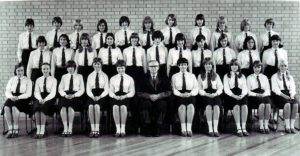 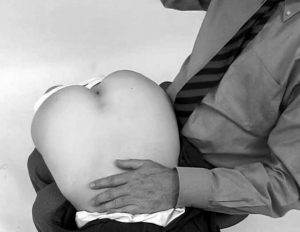 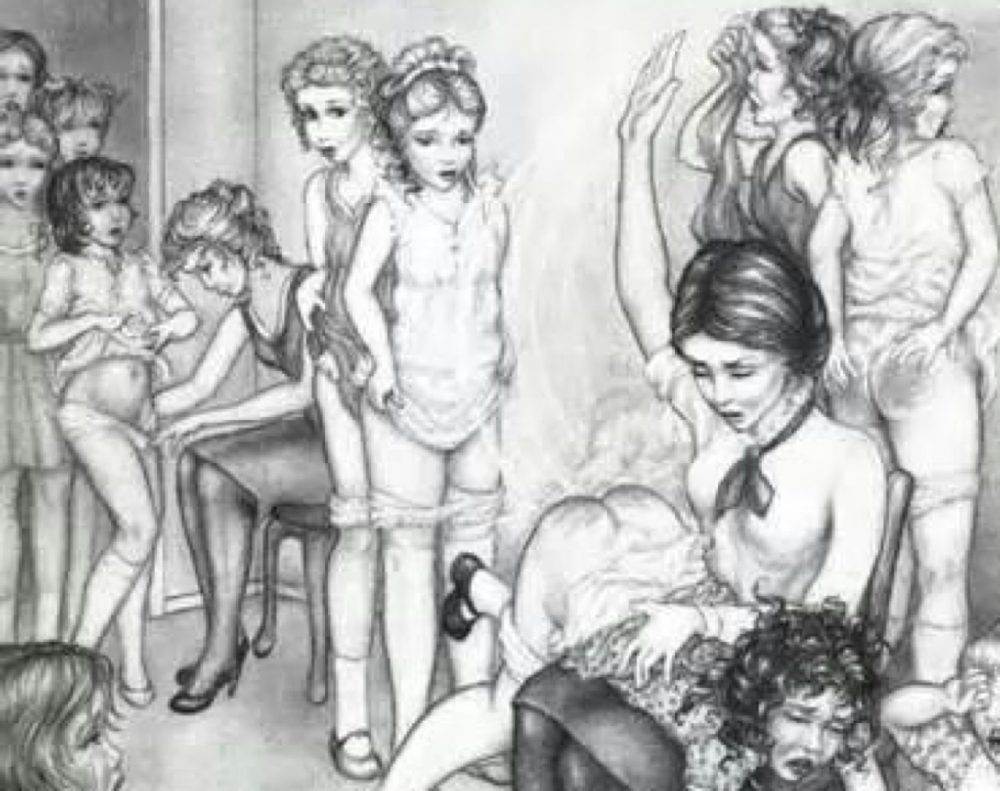 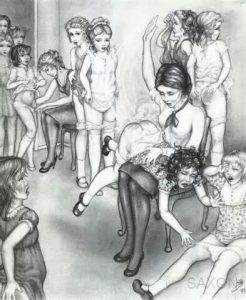 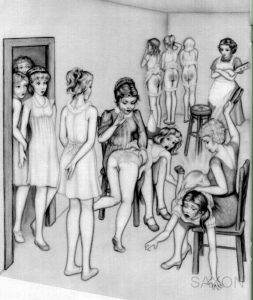 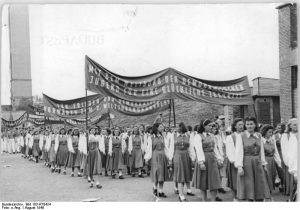